Xavier Riddle and the Secret Museum Wiki
Start a Wiki 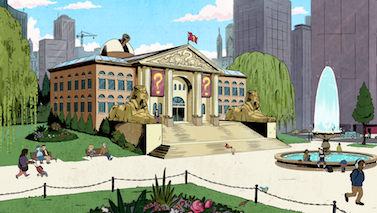 What's on your mind?

No, I love wasting precious address bar space
Yes, I want to be able to easily type this URL

Help where am i i am possibly lost in fandom

Given the length of the title (and how it seems like Yadina gets just as much focus as Xavier) I would love if they just shortened the title to "The Riddles and the Secret Museum".

That would also make a much more attractive acronym: "TRATSM"

To make for an even more attractive acronym... we should acknowledge here that there are more secrets than just a museum here. BERBY for example, even though she lives in the museum, is able to travel beyond it, and appears to be a distinct separate consciousness, who probably taps into the power of the museum, but is still separate.

"The Riddles and the Secrets" would just be TRATS and so much easier to casually refer to the show.

It would ESPECIALLY make more sense to do this if they were to give more focus to X+Y's mom/dad in later seasons, similar to how in s2+ of The Loud House the Louds' parents got focus, when they were presented very similar to how the Riddles' parents (face never shown) are presently.

Plus... I kind of think of Dr. Zoom and Berby as part of the Riddle family too.

Heck... given the lack of information we have about Brad's parents (has he made reference to them in present? all I remember is a flashback to his dad giving him something) what if Brad was raised in a single-parent household and then that parent married into the Riddle family (maybe if Xavier has an uncle or aunt?) then Brad could be effectively adopted into the Riddle family and we'd finally have a surname for him.

If they were going to conclude season 1, I would love if they would change the title to something like that for season 2.

We have seen tweaks like that before, like how "Dragons: Riders of Berk" became "Dragons: Defenders of Berk". Still an overall "dragons" common element in the title, just like "Riddle and Secret" could be a root phrase.

I have been puzzling over who the man in the painting entrance is supposed to be... I figured it might be based on a real painting but I haven't found one so far.

Then I noticed... doesn't it sort of resemble Brad? 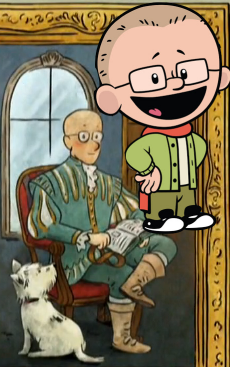 What if Brad is actually painted in the past as an adult and then the museum eventually obtains that artwork?

What if perhaps Brad was TRAPPED in the past at some point in some "future" adventure (lost Berby) and had to grow up there? It might be something he is destined to do...

Or maybe I just have a lot of Doctor Who / Legends of Tomorrow / Timeless on the brain.

Help us grow Xavier Riddle and the Secret Museum Wiki