Brad Scott Meltzer is the tritagonist of Xavier Riddle and the Secret Museum, and the best friend of Xavier and Yadina. 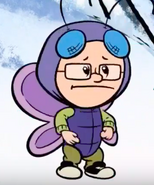 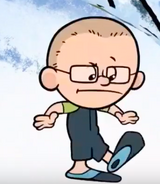 Swimsuit
Add a photo to this gallery

"Danger's not my middle name... it's Scott" is what he says at the start of I Am Amelia Earhart. Also at the end of the same episode he says "mine's Scott" after Amelia reveals her middle name is Mary.

The international Xavier Riddle website reveals his last name to be Meltzer, proving that he’s a self insert.

Brad tends to be the most nervous and neurotic of the group. He is sometimes hesitant to go on adventures. Brad is quite partial to butterflies, as well as action heroes. Time traveling makes him temporarily dizzy; the further back the three go, the dizzier he gets.

In I Am Susan B. Anthony, Yadina remarks to Brad "we're just used to looking after the Secret Museum ourself" indicating that the 3 kids did not discover it together: in the past Xavier and Yadina had tended it alone prior to inviting Brad to join them. 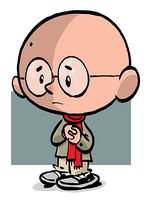 Retrieved from "https://xavier-riddle-and-the-secret-museum.fandom.com/wiki/Brad_Meltzer_(character)?oldid=5792"
Community content is available under CC-BY-SA unless otherwise noted.