Bradman (or Brad-man) is the heroic alias that Brad Scott dons in I Am Leonardo da Vinci when he dons Vinci's wings.

The name likely a reference to "Batman", who also wears a cape which can transform into wings for gliding in certain incarnations.

Bradman is also depicted at the start of I Am Harry Houdini when Brad is in George Washington Carver's garden. 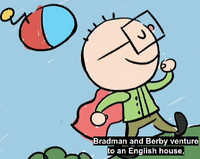 At the start of We Are the Bronte Sisters an illustration is shown of Bradman with Berby and he appears to look identical to Brad.

When narrating the tale aloud, Brad uses phonetic devices such as echoing (Berbie...berbie...berbie) and a dramatic sting (bumBumBUM!)

Retrieved from "https://xavier-riddle-and-the-secret-museum.fandom.com/wiki/Bradman?oldid=2612"
Community content is available under CC-BY-SA unless otherwise noted.