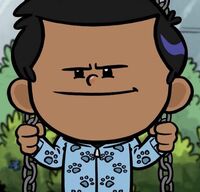 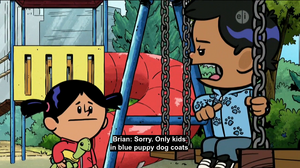 Brian is a bully who appears in I Am Jackie Robinson.

He doesn't allow anyone who doesn't have a puppy-dog coat like he does play on the swings. However, he gets reformed by Yadina Riddle at the end of the episode, He also made another appearance in the episode, I Am Nellie Bly.

He was only named in the closed captions and credits.

He is voiced by Davide Fair.

Retrieved from "https://xavier-riddle-and-the-secret-museum.fandom.com/wiki/Brian?oldid=6484"
Community content is available under CC-BY-SA unless otherwise noted.