Xavier Riddle and the Secret Museum Wiki
Register
Don't have an account?
Sign In
Advertisement
in: Characters, Females, Kids,
and 3 more

Kid in a green coat

Kid in a green coat

A kid in a green coat appears in I Am Jackie Robinson. She wants to use the slide but is denied by Yadina Riddle. Yadina declares the "only kids in red coats" prejudicial block for slide usage in attempt to gain a sense of control after Brian discriminates against Yadina's coat to prevent her from using the swings.

Aside from her coat, she wears blue pants atop black and white shoes, black-rimmed glasses, and orange hair tied up in a big ponytail, with some gold circle earrings.

She sighs sadly and immediately obeys Yadina, walking away in the opposite direction of Yadina somewhere else. This makes Yadina regretful as she shouts "wait!" at the girl, who does not react and keeps walking away from her.

At the end of the episode, when Yadina and Brian make up and Brian lets Yadina on the swings, she can be seen playing with Xavier, as Xavier chases her around the yard. Then she uses the slide after him.

She recurs at the end of I Am Theodore Roosevelt where the captions describes her as "kid" when parenthesizing her laughter as she traverses on the playground in front of the main cast on the monkey bars.

She is also seen practicing ballet early in I Am Billie Jean King, appearing a second after Brad enters the ballet room

She also appears in I Am Sir Arthur Conan Doyle as Harper's friend; 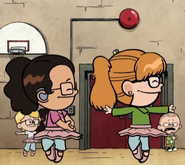