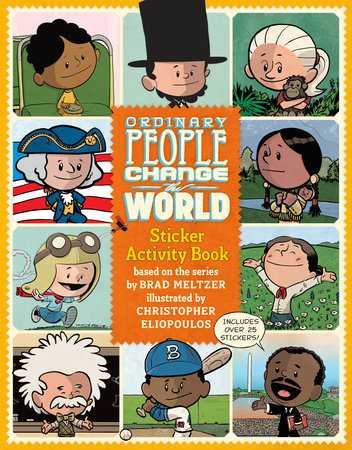 Ordinary People Change the World is the book series by Brad Meltzer that the show is based on. Although there are 74 eleven-minute episodes and one 55-minute special, the series only had 29 books about the following figures:

Most books begin with "I am" mistakenly transcribed "I Am" (there is no uppercase A) in the gallery at https://www.ordinarypeoplechangetheworld.com/Books/

Some of the books in the series include titles which do not prominently display the name of their subject, instead using an adjective to describe them and using their name as a subtitle. These call themselves a "little book" and the gallery calls them a "baby board book". There are only so far FOUR, all of which reuse characters from the main series: Lincoln, King, Earhart and Goodall.

There is also a Journal for Extraordinary Kids with Lincoln & Sacagawea on the cover, and a Strong Girls Gift Set with Goodall, Parks, Earhart and Sacagawea.

Retrieved from "https://xavier-riddle-and-the-secret-museum.fandom.com/wiki/Ordinary_People_Change_the_World?oldid=6508"
Community content is available under CC-BY-SA unless otherwise noted.