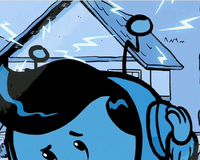 The Translator is a device that Xavier Riddle wears on his head which translates foreign languages. A running trope is that Xavier is confused by what people are saying and then Yadina reminds him to use it. He then uses his hand to adjust the dial until what they say is dubbed into English.

Instances of it being referenced in episodes include

Even though Brad and Yadina aren't wearing his hoodie, they also seem to be able to understand what is spoken (and their dialogue is dubbed into English for the viewers) so it might be some kind of area effect.

This not only translates what the figures say, but also appears to do the reverse as well: they are able to understand what the Riddles (and Brad) are saying to them as well.

The speakers don't appear to notice that they are speaking any other kind of language, so it is likely that what is heard on the show (and to the travelers) is meant to be loyally happening within their own minds.

Retrieved from "https://xavier-riddle-and-the-secret-museum.fandom.com/wiki/The_Translator?oldid=5807"
Community content is available under CC-BY-SA unless otherwise noted.