Xavier Riddle and the Secret Museum Wiki
Register
Don't have an account?
Sign In
Advertisement
in: Characters, Males, Historical Figures,
and 4 more

Theodore Roosevelt was an American statesman, politician, conservationist, naturalist, and writer. He served as:

He does not have an Ordinary People Change the World book, but he appeared in an episode of Xavier Riddle and the Secret Museum called I Am Theodore Roosevelt.

He is voiced by Eamon Hansen.

He actually seemed to dislike the nickname "Teddy", and had a history of condemning people who called him that. He does not protest when Xavier calls him this though. Perhaps perplexed by how Xavier talks about his mustache.

Eleanor Roosevelt is his niece and her husband FDR was Theodore's 5th cousin. 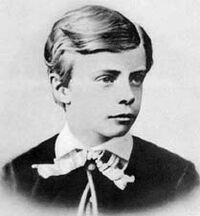 He has brown hair, a mustache, and glasses.

Xavier actually compliments his mustache immediately upon meeting him in 1865, even though at less than eight years old, he probably would not have any facial hair since he would not have started puberty. A photograph of him at eleven years old showed him bare-lipped.

Teddy notably does not say anything when Xavier mentions this, but looks down and wiggles his lip. It's unclear whether or not he can actually see a mustache there like Xavier can.