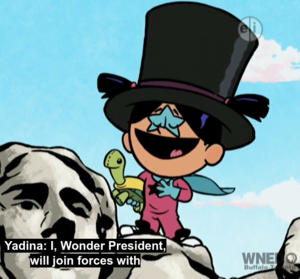 Wonder President is the superhero alias of Yadina Riddle depicted in We Are the Bronte Sisters.

Yadina proposes that she team up with Bike Man.

The costume involves a black top hat, with a blue star painted on Yadina's face resembling her usual black star on her shirt, which has become a jumpsuit. She also wears blue gloves and is shown with Mount Rushmore in the backdrop.

The role emphasizes Yadina's desire to be President of the United States, as she stated in I Am George Washington.

Retrieved from "https://xavier-riddle-and-the-secret-museum.fandom.com/wiki/Wonder_President?oldid=2607"
Community content is available under CC-BY-SA unless otherwise noted.