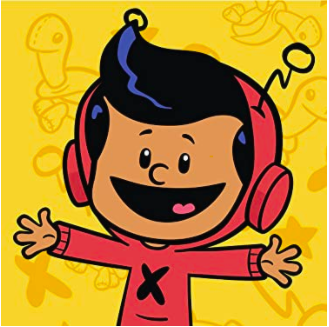 Xavier Riddle is the leader of the time travel trio, and the son of the Riddle family, who owns the Museum atop The Secret Museum.

I Am Johann Sebastian Bach

In the premiere episode of the show, Xavier signs up for the school talent show, intending to play "Hot Cross Buns" on the recorder. He had done this the previous year. However, his skills have gotten worse. Xavier becomes envious of the Little Girl, who plays better than him. This calls for a trip to the Secret Museum. There, Xavier and his friends go back in time to meet Johann Sebastian Bach, a German composer and musician of the Baroque period. Bach also enjoys playing music, and works hard to play his song. This inspires Xavier to work hard and practice to get better at the recorder. Through hard work and dedication, Xavier rocks the school talent show.

I Am Mary Shelley

Xavier has volunteered to tell the first campfire story at the Nature Troop campout. Xavier has a reputation for telling silly stories, but never scary ones. This becomes an issue for him as everyone is expecting a scary story. The gang goes back in time to meet Mary Shelley, an English novelist. Mary tells stories in her own unique way. Xavier attempts to tell scary stories, but ends up telling a story that is both spooky and silly. He realizes that he can tell stories in his own way like Mary did, by telling spooky and silly stories. He entertains everyone at the Nature Troop campout by telling a spooky/silly story about a tickle monster.

I Am George Washington Carver

While the gang is playing soccer, Xavier accidentally smushes a flower. While Yadina Riddle is concerned for the little plant, Xavier doesn't see what the big deal is. The gang then goes back in time to meet George Washington Carver, an American agricultural scientist and inventor. The three accidentally smush three more flowers in the process. George helps the kids deliver the plants to his secret garden, where he helps take care of them. They even keep the plants safe from renegade soccer players. George helps Xavier realize that many things, even peanut butter sandwiches, are made from plants, and that the Earth is worth respecting and protecting. Back home, Xavier helps take care of the plant that he smushed.

I Am Leonardo da Vinci

Xavier wants to sign up for a club at school. However, he can't pick amongst dance, basketball, art, or robotics. His indecisiveness prompts a trip to the Secret Museum, where the trio goes back in time to meet Leonardo da Vinci, an Italian polymath of the Renaissance. Like Xavier, Leonardo is shown to be interested in many things, such as art and inventing. However, he doesn't have to pick just one activity, and he finds that one activity helps with another. This helps Xavier realize that it's okay to try many different activities.

I Am Isaac Newton

Xavier plays mini-golf for the first time, but he fails despite how hard and fast he swings. The kids go back in time to meet Isaac Newton, an English scientist. Isaac is also having issues, such as trying to jump farther than the other boys. However, he slows down and thinks through his problem, unlike Xavier who wants to rush into the problem. However, Isaac slowing down and thinking helps him win the jump competition, and this inspires Xavier to do the same with mini-golf. By slowing down and thinking, Xavier makes a hole-in-one.

Xavier wants to stay up to see a supermoon, but he doesn't know how to ask his parents. The gang goes back in time to meet Cleopatra, a queen of Ancient Egypt. She is in the same position as Xavier, as she wants to ask King Ptolemy if she can skip her lessons to go to a festival in town. She teaches Xavier how to ask confidently and politely, as well as use correct eyesight and posture, and come up with a compromise. By using all of these things, Cleopatra successfully convinces her dad to let her go to the festival. Xavier uses Cleopatra's methods to convince his parents to let him see the supermoon, and it works.

We Are the Wright Brothers

In this episode, Xavier shares the spotlight with his sister Yadina. They are doing an egg parachute project, but the eggs keep breaking. They give up, which Brad Meltzer (character) cannot bear to see to his friends disappointed, so he takes them to the Secret Museum, where they go back in time to meet the Wright Brothers, who created the airplane. Orville and Wilbur are struggling to make their toy helicopter go, but they don't give up, because mistakes help them learn. After they learn what didn't work, they find out what does and successfully fly the toy helicopter. Later, the brothers attempt to make their plane fly, but they keep crashing. However, they still don't give up, and keep pushing their philosophy that mistakes help one learn. After many crashes and rebuilds, they successfully get their airplane in the air, which inspires Xavier and Yadina to persevere with their egg dropping experiment. They find out what doesn't work and what does, and successfully drop the eggs without breaking them.

I Am Mark Twain

Previously, Xavier fell, and now he has to keep his arm in a sling for a whole week, which bums him out because he really wanted to do his one-kid stand-up comedy show. Yadina and Brad can't stand to see him sad, so they take him to the Secret Museum. There, they go back in time to meet humorist Mark Twain, who is also having somewhat of a hard time as he has to do chores. However, he knows how to make things easier: with laughter. With laughter, the gang paints the fence, collect chicken eggs, and collect 10 hay bales to feed to the animals. At first, Xavier doesn't see what's so funny, but later on, he joins in and makes up his own funny character: Chicken Wing Willy, which he incorporates into the comedy show.

I Am Julia Child

Xavier wants to construct his model plane, but he doesn't know how. This prompts a trip to the Secret Museum, where the kids go back in time to meet Julia Child, a famous chef. Julia invites the kids to make strawberry jam with her, but they quickly realize that they need a recipe if they want it to taste any good. Luckily, Julia's Grandmother gives them a recipe and timeless advice: you can do anything if you take it one step at a time. Using the recipe and advice, they make tasty strawberry jam. Xavier uses the same method with making his model plane, as he discovers there are instructions. He follows them and successfully makes his model plane.

I Am Anna Pavlova

Xavier wants to be a magician, but he keeps making mistakes with his magic tricks, such as picking the wrong card. The gang goes back in time to meet ballerina Anna Pavlova, who is struggling with ballet dancing. However, she loves ballet dancing so much, so she keeps on trying and practicing so that she becomes a great dancer. She doesn't let a few mishaps get in her way, even when she falls on stage in front of everyone. This inspires Xavier to use the same philosophy with his magic tricks. By persevering, Xavier succeeds at his magic tricks.

I Am Mary Leakey

There's a scavenger hunt going on in the Museum, but Xavier struggles at it. The gang goes back in time to meet archaeologist Mary Leakey , who is on a hunt of her own to find rare fossils. Mary applies her philosophy of "When you want to find something, you have to slow down and look around" throughout the episode. By using this philosophy, Mary and Xavier find a rare fossil together. This inspires Xavier to try the same thing with the scavenger hunt, and he finds what he was looking for.

I Am Eleanor Roosevelt

Today is a special day at the Museum, and the kids each get special jobs. However, Xavier gets assigned the most boring one in his opinion -- passing out maps. The kids turn to the Secret Museum for this predicament. There, they go back in time to meet Eleanor Roosevelt, a First Lady of the United States. When they first meet her, she's greeting people at a fancy party. Xavier ponders why she isn't doing something more fun, but Eleanor states that fancy parties aren't her thing, and that she prefers to do something more useful, like teach a new friend how to dance. Later, Eleanor becomes a First Lady of the United States, and Xavier sees pictures of her helping people. She also hosts her own radio show, where she tells people to take every chance they get to help others. This inspires Xavier to do the same. Xavier draws maps and passes them out to visitors, directing them to places they might like.

Retrieved from "https://xavier-riddle-and-the-secret-museum.fandom.com/wiki/Xavier_Riddle/History?oldid=6033"
Community content is available under CC-BY-SA unless otherwise noted.