Xavier Riddle is the titular eponymous protagonist of the series, Xavier Riddle and the Secret Museum, being one of three main human characters: himself, his sister Yadina and their friend Brad.

Xavier is a young boy with tan skin and shiny black hair. He wears grey-blue pants and black sneakers over white socks.

He wears a red hoodie with the hood up, "alien"-style antennae on it, and a black "X". This iconic hoodie contains the translator which allows him (and it seems, also Yadina and Brad, despite not wearing one too) to understand non-English speaking historical figures.

Baseball outfit as seen in I Am Jackie Robinson, I Am Lou Gehrig, and I Am Madam President 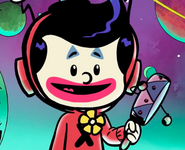 Clown outfit as seen in We Are the Bronte Sisters

Winter coat
Add a photo to this gallery

Xavier is the leader of his group with Yadina and Brad. He appears to be an excitable kid who is eager to go back in time and meet various historical figures. He is described as a kid who loves everything (especially art and basketball), but lives for adventures.

Click here to view the history of Xavier Riddle. 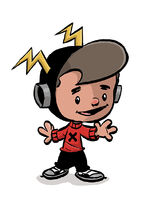 Xavier Riddle and The Secret Museum 👋 Meet Xavier!
Add a photo to this gallery

Retrieved from "https://xavier-riddle-and-the-secret-museum.fandom.com/wiki/Xavier_Riddle?oldid=6655"
Community content is available under CC-BY-SA unless otherwise noted.