Xavier Riddle and the Secret Museum Wiki
Register
Don't have an account?
Sign In
Advertisement
in: Shows

Xavier Riddle and the Secret Museum

Xavier Riddle and the Secret Museum

9 Story
Brown Bag Films.
Xavier Riddle and the Secret Museum is an animated series based on the children's book series Ordinary People Change the World by New York Times best-selling author Brad Meltzer and illustrator Christopher Eliopoulos. This new multiplatform series will introduce kids ages 4-7 to inspiring historical figures – from Rosa Parks to Leonardo da Vinci – who will help them learn important social-emotional concepts. The series is a co-production between United States and Canada.

The series follows the adventures of Xavier Riddle, his sister Yadina and their friend Brad. In each episode, they face a problem and turn to The Secret Museum, a hidden room under an ordinary museum, to help them solve it. The museum allows Xavier, Yadina and Brad to travel back in time to meet real-life historical figures when they were kids. They witness pivotal moments that shaped each of these iconic people and learn social-emotional lessons – such as being resilient in the face of adversity and making and accomplishing goals. Each episode is designed to help viewers make the connection between the attributes that made each historical figure a hero, and those same attributes within themselves, while approaching history in an engaging, age-appropriate manner. Each episode of will include two animated 11-minute stories with accompanying interstitial content.

The success of the show has led to a number of spin-off merchandise.

Xavier Riddle and the Secret Museum has received critical acclaim. Rick Bentley of KGET said "The idea is to make the show both entertaining and informative for youngsters ages 4-7 but Meltzer’s convinced there’s enough humor and historical facts to make the shows fun to watch by older viewers" and that the show "makes history fun". Sherryl Wilson of Mom Does Reviews says that the show "helps kids learn". GeekMom called the show "wacky, child-like, fun, and adventurous."

The AV Club recommended the show for watching at home during the COVID-19 pandemic.

During its U.S. debut, Xavier Riddle and the Secret Museum emerged as one of PBS KIDS’ top programs on TV and digital platforms, reaching 3 million children on PBS TV stations in its first six weeks on-air and streamed more than 41 million times across PBS KIDS’ owned digital platforms since its premiere.[1]

Gina Catanzarite of the Parents Choice Foundation gave the show a Gold Award, and said that the show "delightful take on teaching kids about history" and called it "novel and relatable."

The show has also been nominated for several awards.

This show is funded in part by ABCMouse.com and Kiddie Academy. Also, by Viewers Like You. 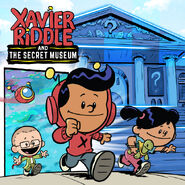 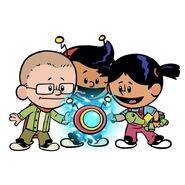 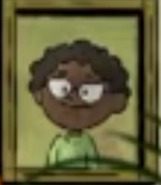 Unknown historical figure from I Am Rosa Parks.