Xavier Riddle and the Secret Museum Wiki
Register
Don't have an account?
Sign In
Advertisement
in: Characters, Males, Minor Characters 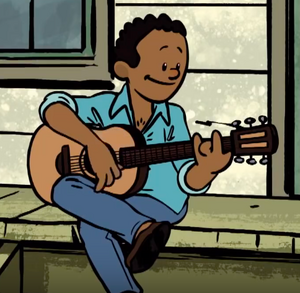 The Young Man is a man seen on the porch of the corner store in I Am Zora Neale Hurston.

He knows how to play the acoustic guitar and is skeptical of the Old Man's stories.

He is voiced by Deven Mack.

He also made a cameo in I Am Jackie Robinson.

I Am Rosa Parks

Another called this appears to talk to Rosa Parks though he looks different. He helped her participate in organizing a bus strike in 1955 after the Riddles fast-forward 32 years from 1923.